You probably have watched some of these viral Youtube videos with guys playing acoustic guitar like this:

There is much more to ranking well on YouTube than just getting a great mix but it can make a substantial difference. We will talk about other “ranking” factors but let’s jump into the beginner’s guide to mixing guitar.

I use PreSonus studio one as my daw software. The steps I’ll show you is a general process that applies to whichever daw you are using. Let’s jump into this great beginner’s guide to mixing the guitar.

Ask every sound engineer, and they will tell you, “The mix is only good as the recording.”

It’s not necessary to record at loud levels; you risk getting ‘clipping’ in your recording. This is when the pickup levels are too high and your recording will sound fuzzy and poorly defined. Don’t get too low either, aim for a middle ground where you don’t clip at the top and stay green around the middle.

If you record guitar directly, then the guitar’s quality and sound will be the most important factors in the result of your mix.

In case you use mics to record your guitar, their quality along with the mic placement can make a substantial difference.

When you import the song with PreSonus Studio One, it will look like this:

It will open a bunch of options below. 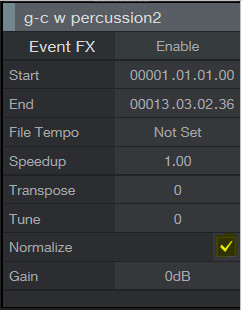 What that does is takes the highest peak and turns the whole audio up until that highest peak is the loudest that it can be without clipping. You geta full, healthy signal.

This will only help if the signal is low, but it will not do much if it’s already excellent.

Remember, you don’t always have to add something; if it sounds good, leave it that way.

First, I like to remove sharp frequencies caused by the guitar pick on the downstrokes. 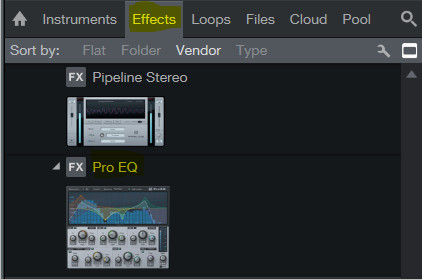 On the right side, click on the “effects” tab and search for Pro EQ. Drag and drop it on your track, and it will open the window like this.

Take the yellow circle and raise it. You will quickly notice wherefrom that loud frequency comes from. It is usually between 100 and 200 Hz. 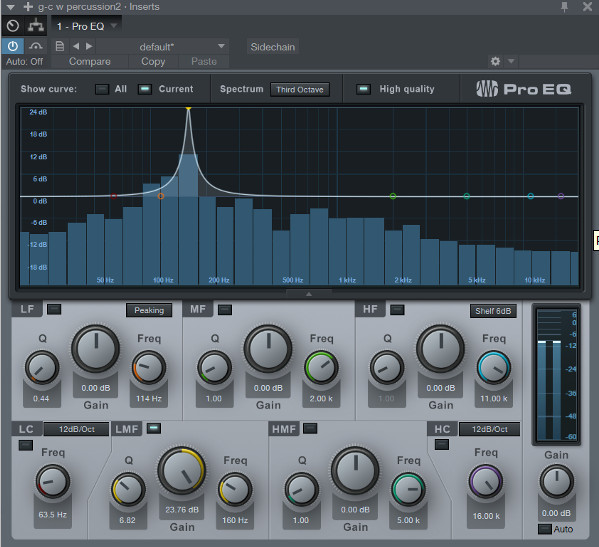 When you raise the spike, you will get the crumbling sound. This way, you will know you are on the right track. The worst sound you get, the better. When you find it, take down those frequencies but do not kill it. 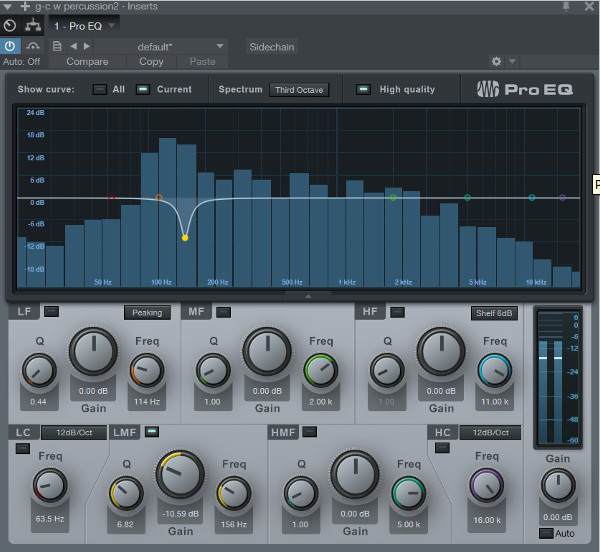 Once that’s settled, you want to make sure no low frequencies cause the guitar to sound muddy. I Like to bring the curve up before that drop, so I tighten the low end and get more power. 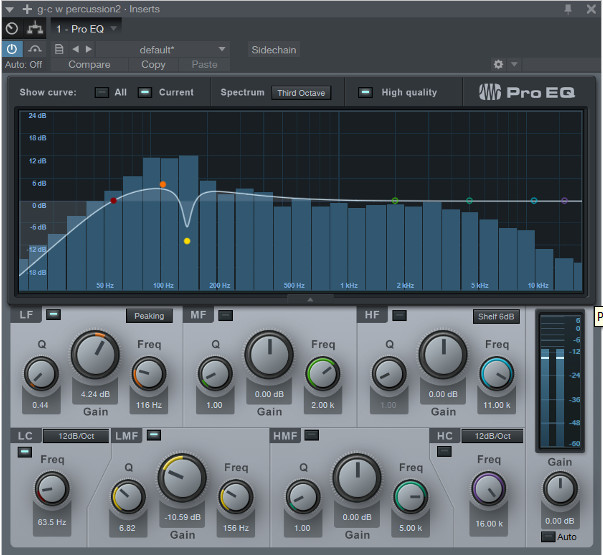 The last thing I like to cut is some mid-range frequencies that add very “cheap” kinda sound.

Usually between500 Hz and 1kHz. 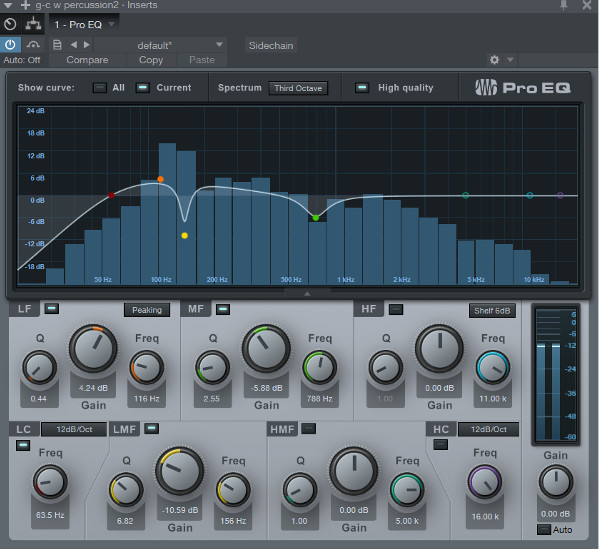 This is a typical mix I like to use for the acoustic guitar. Now, when we remove all undesirable frequencies, it’s time to spice things up and add a few things. Here we go…

I’m don’t like to use the compression on acoustic guitars too much, however, in the era of mobile phones, it adds more power to a signal so when someone is listening to your track on mobile it tends to be with a better signal overall.

I turn again just a notch, then I will bring down the ratio and the threshold. For the attack, release, and knee, I keep it as default. You don’t have to use the compressor at all, but in case you decide, here is what I do:

While you mix a fingerstyle song, especially if it is a guitar only track, you have all the freedom in the world to play with the reverb.

Presonus studio one has a built-in reverb called “Room Reverb.” Just drag and drop it to your track.

Within this plugin, you will find a lot of preset reverbs. The one I like to use is called “Flat Plate.”

I add a little bit pre reverb and around 7s of length. Of course, you can play with size, mix, dry/wet things, but I don’t like to exaggerate too much with plugins. I keep it simple and use the DAW for spicing the acoustic guitar a little bit, not re-shaping the sound. 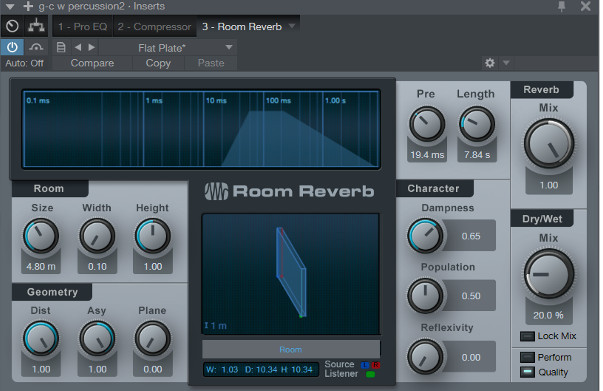 If you don like the Plate reverb preset, you can always go back to default and play around with the size, width, and height of the room, along with with a lot other things.

Step 6 – Getting the
clean sound

Reverb sometimes tends to add a ‘muddy’ sound to your track, so I like to use a plugin called “Fat Channel” to bypass this unwanted effect and give the lower frequencies a cleaner sound.

After I activate this plugin, I turn on the Equalizer and bring the High Pass filter to the middle or slightly more to the right.

This will clean up the muddiness in the reverb and get you the clean sound of acoustic guitar.

To get the loudest possible signal, I use “limiter,” and I go as high as possible to get a good volume on both mobile and speakers.

90% of the time, people will listen to your track on mobile devices. I know it’s against all the rules, but you need to adjust the sound and get a mix that sounds good on mobile.

Usually, a huge problem is a volume; that’s why I like to turn the volume up as loud as possible using the limiter.

After I get the sound and the volume I want, I add the final touches. It is a plugin called “Multiband Dynamic.” For influencing the entire project, both of these plugins need to be dropped on the “Main.” 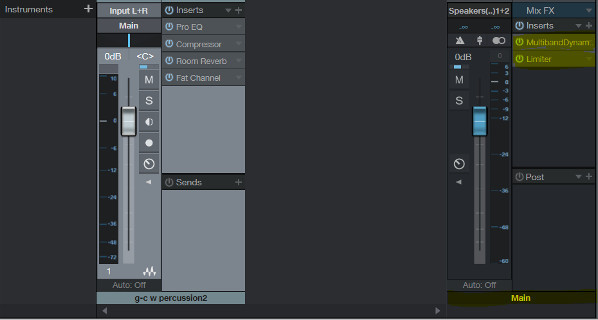 A “Multiband” is an eq that comes in and out when it needs to. It separates the frequencies a little bit to get a better sound.

When mixing a fingerstyle song, I like to turn down lows and mid-lows completely. This way, I get a sharp sound just what I want for the acoustic guitar. 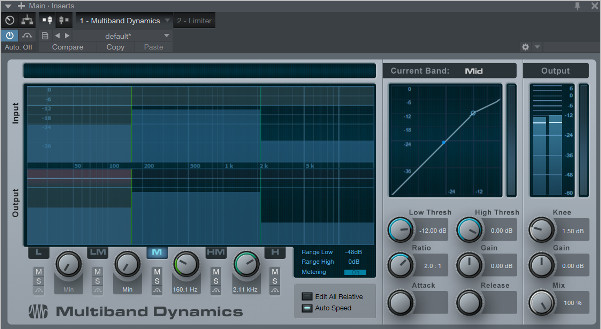 On the right, you can see the amount of compression added on each range of frequencies.

This is it; now you have the complete mix of acoustic guitar ready for speakers and mobile devices—sharp guitar with great signal and no mud.

Alright now, when you have the right mix, let’s talk some more about some howto tips get closer to the viral youtube videos of guys playing acoustic guitar fingerstyle.

Did you ever wonder how the videos like that become viral?

Well, therefore than one factor:

This is always an“organic” factor. Although things have changed through the years, we all like to hear unbelievable playing. If your skill level is high, you have more chances to get heard. Unfortunately, nowadays, playing great is only just one of the factors influencing your success.

I will give you an example. Let’s say you play tremendous, but you record the video with a lousy camera and record your sound with an iPhone. Likely, your video will be poorly received. We all like watching videos with both good sound and video fidelity.

Ten years ago, you could record something extraordinary and get seen. Now, it gets harder each day to come up with something new when people have seen it all.

Nowadays, it is not enough to be a good musician. It comes handy to know a thing or two about social media marketing. Put some effort into great material and then try getting the most out of it.

Also, don’t shoot for the quantity but quality.

Don’t get discouraged, equipment is expensive but not crucial. There’s a lot you can do with just your laptop and a mobile phone. Eventually, after you invest money in better equipment, your material will become better. We all start somewhere.

We all know it is hard to come up with something new, so if you think of an idea, that nobody has tried, that is a great plus. Allowing people to see something that they haven’t seen will allow you to shine like a light.

So before you post a video of you jamming in your bedroom, do some research. Maybe there’s a cool place near you to record your video and make it more interesting.

Maybe there is something else you can do, steal an idea from a drummer and adjust it to a guitar player. I know it is hard, but the more effort you put into something new, the more attractive your video will be.

Presonus studio one is one of the best DAW for mixing an acoustic guitar due to pre-built plugins but, in case you use Cubase, Nuendo, Pro tools, or any other DAW, each has it’s own EQ, limiter, reverb, and mastering tool. The tools I discussed are always pre-built, and each DAW has them.

Fabfilter makes great plugins usable for Studio One and some of the other software from the list.

Nowadays, when the time of hardware is gone, plugins mean everything, so from time to time, when you run on a plugin, you like you will need to invest some money into getting the sound you want.

What are the Names of the Guitar’s Strings?

Please log in again. The login page will open in a new tab. After logging in you can close it and return to this page.